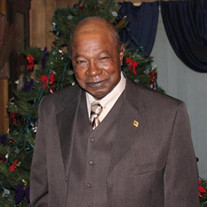 Mr. Major Williams, Jr., age 83, passed away on December 12, 2020. Services are private. Mr. Williams was a native of Jones County before moving to Baldwin County in the 1970's. He retired from Corrections in Putnam County, and he loved fishing,... View Obituary & Service Information

The family of Major Williams Jr. created this Life Tributes page to make it easy to share your memories.