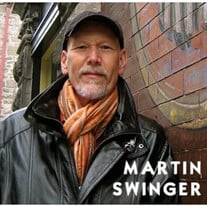 Martin Foster Swinger Martin Swinger, a loving, generous, and highly esteemed singer-songwriter of Asbury Park NJ, formerly of Milledgeville, GA passed away unexpectedly at age 66 in Augusta GA. Martin was a renowned composer, writer, and community activist, who will forever be remembered for his soulful and heartfelt masterpieces, most definitely “songs worth listening to.” Martin’s lifelong commitment to making the world a better place through music, theatre, and art education, created community and inspiration wherever he went. Performing more than 80 gigs a year, Martin’s concerts offered a surprisingly eclectic mix of songs. In addition to his panorama of award winning original songs, he also sang swing & jazz, folk & traditional, as well as klezmer and show tunes. His concerts often included improvised music created on the spot, perfect for the occasion. Perhaps most memorable, Martin was known for his fluid voice, astonishing vocal range, and engaging stage presence for both adult and family audiences. With music being an honored Swinger family tradition, Martin began singing solos in public by the first grade and writing songs by his teens. Early years in Georgia were spent playing piano, ukulele, and guitar, making music with friends and family, and singing in school and church choirs. Martin formed his first band while in Junior High School, and in High School, discovered poetry, Paul Simon, and Harry Nilsson, all of which would influence his lifelong work as a songwriter. He attended Valdosta State College in Georgia where he majored in Theater and starred in and wrote music for many theatrical productions. In 1977, Martin joined a group of actors, musicians, dancers, and theater artists as a founding member of the iconic Theatrical Outfit in Atlanta. Creating original plays for adult and family audiences, Theatrical Outfit often featured Martin’s original songs. After the Theatrical Outfit, Martin met Mitch Barrett, a singer/songwriter from Kentucky, with whom he formed the band Mandala performing frequently on the East Coast . At this point, Martin began to take his personal songwriting more seriously, and his first adult song, “Look Who’s Cryin’ Now” earned a ‘Certificate of Merit’ from The American Song Festival. From Kentucky, Martin’s journey took him to Virginia, where he formed the band Just Plain Folk. The next move was to Maine, and Martin's marriage to Brian Kaufman in 2012 was among the more colorful in Maine, with color photos of the occasion occupying the front page of the central Maine papers for several days running. In Maine, Martin celebrated nine years as the host and producer of an original cable television show, “ALIVE! From Johnson Hall”, a popular concert series featuring Maine musicians, which continues to broadcast to over 120,000 homes across Maine. His broadcasts also include “At Home With The Singing Chef,” and later, “Live from the Rainbow Room.” Martin was a regular at Texas’ beloved Kerrville Folk Festival, where he won songwriting awards and taught songwriting at the Threadgill Theater. He was also honored with songwriting awards at the South Florida Folk Festival, Ben and Jerry's Solarfest, and Bar Le Drague in Quebec City, Canada. Martin’s improvisational music was inspired and nurtured by world class teachers like Rhiannon (founding member of Bobby McFerrin’s Voicestra) and Dr. Ysaye Maria Barnwell (Sweet Honey in the Rock). His numerous bands and collaborations in Maine included Zingo Zango Generic Jug Band, Improvox, Brio, and Wilderness Road. His music was spread far and wide through his membership in national organizations like the Children's Music Network and the People's Music Network, his stewardship of the historic Johnson Hall Performing Arts Center, his many appearances singing the national anthem for the Maine legislature, and his most recent work as the Vice President of Rainbow Quest! a nonprofit for diversity education. In addition to his biological family, Martin was considered family by all who met him, many of whom were blessed to have him write original songs for special occasions like wedding and birthdays. Martin was pre-deceased by his parents, Levi Foster and Harriet Lillian Swinger. He is survived by his husband and partner Brian J. Kaufman of Asbury Park, NJ; his daughter, Jessamyn C. Morales of Augusta, GA; his sister Sandra S. Williams of Augusta, GA; and his brother Gary E. Swinger (Vickie) of Milledgeville, GA. Additional survivors include niece Rachel S. Sposito of Ashburn, VA; and nephews Aaron Russell Swinger (Samantha) of Springfield, GA; and William Foster Swinger (Emmaline) of Milledgeville, GA, along with several great nieces and nephews, multiple cousins, and a host of friends in the USA and throughout the world. Services will take place at 10 am at Heritage Memorial Park in Milledgeville, Georgia on Friday, July 16th. Martin with be composted, as he wished, in a green burial. Heritage Memorial Park, 371 Log Cabin Rd NE, Milledgeville, GA 31061 An exuberant celebration of his life will be on Saturday, July 17th, from 2 pm – 4 pm. The Mill, 224 E. Walton St., Milledgeville, GA, 31061 Other tributes to Martin will include numerous radio shows and live performances in Maine, New Jersey, New York, Virginia, and Georgia, as well as online events to reach those at home as well. Memorial donations to benefit Rainbow Quest can be sent to: Pickadilly Specialties Corporation, 501(c)3 nonprofit, 1538 Asbury Avenue, Asbury Park, NJ 07712 Online at RainbowQuest.Org Martin's music can be found on his website, https:/martinswinger.com as well as on CDBaby, Spotify, and YouTube. express online condolences at www.williamsfuneral.net Williams Funeral Home and Crematory of Milledgeville in charge of arrangements

The family of Martin Foster Swinger created this Life Tributes page to make it easy to share your memories.

Martin Swinger, a loving, generous, and...