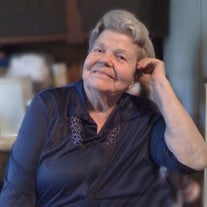 Mary Lucy McDade Blizzard, age 93, of Baldwin County, passed away Sunday, March 21, 2021. Funeral services for Mary Blizzard are pending, and will be announced later. Mary was a native of Putnam County, but lived in Baldwin County for the past... View Obituary & Service Information

The family of Mary McDade Blizzard created this Life Tributes page to make it easy to share your memories.