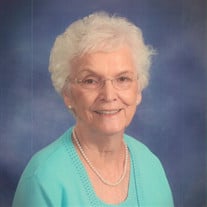 Mary Lavender Oglesby, age 87, passed away Tuesday, December 10, 2019. Funeral Services for Mary Oglesby will be conducted Saturday, December 14, 2019 at 12:30 pm in Northside Baptist Church. Interment will follow in Baldwin Memorial Gardens. The family will receive friends at the Williams Funeral Home on Saturday, December 14, 2019 from 11:00am until 12 noon. A native of Swainsboro, she was born on January 10, 1932 in Emmanuel County to the late James Roberson and the late Vondell Collins Roberson. In addition to her parents, she was preceded in death by a grandchild, Owen Lavender, by a sister, Kathleen Oglesby, and by a brother, Larry Roberson. Mary lived in Milledgeville most of her life. She enjoyed her family, especially her grandchildren, as well as cooking and sewing. She was a member of Northside Baptist Church. Mary is survived by her son, Johnny (& Patsy) Lavender, Jr. of Cornelia ; two daughters, Connie (& Gary) Brock of Cartersville and Susan (& Tony) Waters of Milledgeville ; by her grandchildren, Trich VanGorder, Wil Lavender, Jeremy Brock, Josh Brock, Jennifer Livingston, and Carrie Hitchcock ; numerous great grandchildren ; two sisters, Nell Jeffers of Jones County and Janice Brooks of Milledgeville ; and several nieces and nephews. Condolences may be expressed online at: www.williamsfuneral.net Williams Funeral Home and Crematory of Milledgeville is in charge of arrangements.

The family of Mary Lavender Oglesby created this Life Tributes page to make it easy to share your memories.