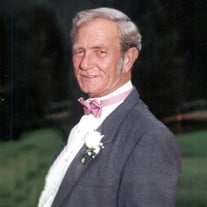 Melvin O. Meadows, age 83, of Milledgeville, passed away Thursday, October 17, 2019. Funeral Services will be conducted Sunday, October 20, 2019 at 3:00pm in the Chapel of Williams Funeral Home with Rev. Larry Glover officiating. Interment will follow in Heritage Memorial Park. The family will receive friends at the Williams Funeral Home on Sunday, October 20, 2019 from 1:00pm until the service hour. A native of Donaldsonville, he grew up in East Macon, and had lived in Milledgeville since 1966. He was born August 26, 1936 to the late William O. Meadows and the late Sybil Barker Meadows. In addition to his parents, Mr. Meadows was preceded in death by his wife, Betty Lou “Nan” White Meadows, by his son,Timothy William Meadows, and by a brother, Carlton Meadows. Mr. Meadows was a veteran, having served in the U.S. Army, and was Retired from Georgia Power. He was a member of the Baptist faith. Melvin is survived by: his daughter, Lori Meadows Berry of Milledgeville ; his grandchildren, Aaron Brien Berry, Carli Grace Cox, Cory William Meadows, and Clint Lee Meadows ; his brothers, Bill Meadows and Darrell Meadows ; and by a sister, Kathy Meadows Kimbrough.

The family of Melvin O. Meadows created this Life Tributes page to make it easy to share your memories.