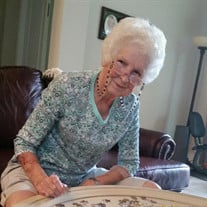 Mrs. Mildred Hetrick Daniel, age 85, passed away on Thursday, August 6, 2020. A service will be held on Tuesday, August 11, at 11:00 am in the chapel of Williams Funeral Home of Milledgeville with Rev. Grady Mims officiating. Interment will be private at West View cemetery. The family will receive friends from 9:30 until the service hour at Williams Funeral Home. Mrs. Daniel is survived by her daughter, Melinda (Howard) Screws of Dublin; sisters, Margaret Jacka and Ann Hines of Mt. Union, PA; brother, Walter Smith of McVeytown, PA; and grandchild, Ben (Taylor) Screws of Macon. Mildred H. Daniel was born on April 3, 1935 to proud parents, Charlotte and Bruce, in her family home in Mt. Union, Pennsylvania. She spent her middle and high school years in Clearwater, Florida. Here under the influence of her Granny Kane, she learned about forgiveness, contentment, self-reliance and most importantly, the love of Jesus Christ. She graduated from Clearwater High School in 1954 as the class president. She had worked at Woolworth’s and had a paper route to earn money for nursing school and also joined the United States Army. While at Georgia Baptist Nursing School, she did a rotation in Milledgeville. Here she met Benny, her husband of 50 years. After serving in the Army, Mildred and Benny settled in Milledgeville, both working at the Central State Hospital. They started their family here and welcomed Melinda in 1961, and then six years later on Thanksgiving Day, Bruce arrived. The family moved for career growth and re-settled in Dublin, Georgia where Mildred finished her nursing career as Chief Nurse for District V Public Health Department. While in Dublin she saw the high school and college graduations, marriages, launch of her Melinda and Ben’s careers and birth of her only grandson, Ben. This gave her a great sense of accomplishment, gratitude and security in knowing her children were prepared for life. After retirement, Mildred and Benny moved back to Mt. Union, Pennsylvania so Mildred could have time with her brothers, sisters and extended family. They joined Cedar Crest Baptist Church and enjoyed working with the summer youth camps and visitation ministries. After losing Benny in 2008, Mildred spent more time with Bruce and Melinda and focused on taking care of them and their families. After losing Bruce unexpectedly in 2017, she spent more time with Melinda and Howard. She was thrilled to see Ben graduate from Medical School in 2018 and to attend his marriage to Taylor in 2020. She lived a full life of service to God and family. She will be missed by all who knew her.

Mrs. Mildred Hetrick Daniel, age 85, passed away on Thursday, August 6, 2020. A service will be held on Tuesday, August 11, at 11:00 am in the chapel of Williams Funeral Home of Milledgeville with Rev. Grady Mims officiating. Interment will... View Obituary & Service Information

The family of Mildred Daniel created this Life Tributes page to make it easy to share your memories.