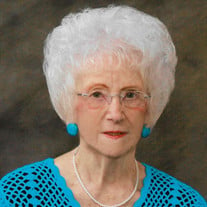 Mildred Maria Wood Wood of Milledgeville passed away March 12, 2019 at Chaplinwood Nursing Home after declining health. She was born on June 15, 1929 in Wilkinson County to the late Lawrence Elam Wood and Willie Mae Fountain Wood. Mildred was married to Wade Wood for 57 years until his death in February 2004. She worked with her husband in their country store in Cooperville, Georgia , for over twenty- five years. After closing the business she became a full time homemaker. She was a loving wife and mother as well as a very nurturing grandmother and great grandmother. Survivors include two daughters and sons-in-law: Wadeen and Donnie Hand of Nashville, GA, Darlene and Willard Coley of Milledgeville, GA; one son and daughter in-law: Mike and Jackie Wood of Milledgeville. She is also survived by sixteen grandchildren, their spouses and twenty-three great grandchildren. Many nieces, nephews and great nieces and nephews also survive their “Aunt Mill”. Along with her parents and husband she was preceded in death by two sisters: Doris Wood Eady, Sarah Wood Cathy Reynolds and their spouses; three brothers: Oscar Wood, Woodson Wood, Otis Wood and their spouses. Mildred and her husband, Wade, were instrumental in helping build and support several churches in Wilkinson and Baldwin County. She was known for her love of the Lord and for being a woman of honor. Many lives were touched by her example as a Proverbs 31 woman. People sought her wisdom and Godly counsel. During the wee hours of the night Mildred prayed for her family, friends, and governmental officials. She served as a Sunday School teacher over the years, worked as a volunteer at the Crossroads Pregnancy Center and also volunteered with Serenity Hospice. For many years she was responsible for purchasing fruit and candies for goody bags to distribute at Christmas to residents at the former Central State Hospital. She had a servant’s heart which was so evident in her many selfless acts. The love of the Lord radiated from her and even strangers were drawn to her when she was out in the public. Mildred will be greatly missed by all who had the privilege of knowing her. The family will receive friends Thursday, March 14th, at Williams Funeral Home from 6-8 p.m. and the funeral service will be held at Freedom Church, 500 Underwood Road, Milledgeville, on Friday, March 15th at 2 p.m with burial at Cooperville Baptist Church Cemetery. In lieu of flowers donations can be made to Crossroads Pregnancy Center.

The family of Mildred Wood created this Life Tributes page to make it easy to share your memories.