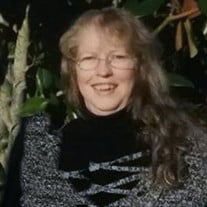 Molly Jane Manley, age 62, of Milledgeville, passed away Tuesday, January 7, 2020. Funeral Services for Molly Manley will be conducted Saturday, January 11, 2020 at 2:00pm in the Chapel of Williams Funeral Home with the Rev. Larry Glover officiating. Interment will follow in Heritage Memorial Park. The family will receive friends at the Williams Funeral Home on Saturday, January 11, 2020 from 1:00pm until the service hour. Molly was born in Athens, on February 26, 1957 to the late Edward Arthur Manley and the late Dr. Jo Ann Seagraves Manley. She was a member of the First Presbyterian Church of Milledgeville. She was a 1975 graduate of Jackson High School in Jackson, Georgia, and attended Young Harris College. Ms. Manley retired from Childcare. Molly was survived by: her sister, Myra Manley Watkins of Haddock ; brothers, Thomas E. Manley of Milledgeville, George A. Manley of Sandersville, and Bruce L. Manley of Menlo, GA ; a nephew, Kyle Watkins of Sandersville ; a niece, Lindy Ann Watkins of Valdosta ; an uncle and aunts, George T. and Geraldine Seagraves and Hassie Rice Seagraves, all of Danielsville, GA ; and several cousins. The family may be contacted at the home of Myra M. Watkins in Haddock, GA. The family has asked, that in lieu of flowers, Memorial Contributions be made to The American Cancer, P.O. 22478, Oklahoma City, OK 73123. Condolences may be expressed online at: www.williamsfuneral.net Williams Funeral Home and Crematory of Milledgeville is in charge of arrangements.

The family of Molly Jane Manley created this Life Tributes page to make it easy to share your memories.