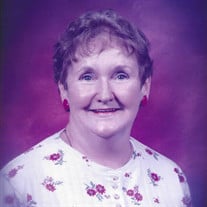 Patricia Elizabeth Ward Donovan, age 85, formerly of Milledgeville, passed away Friday, December 4, 2020. Funeral services for Pat Donovan will be conducted Wednesday, December 9, 2020 at 10:00 am in the Chapel of Williams Funeral home of Milledgeville with Father Young officiating. Interment will be in the Georgia Veterans Memorial Cemetery. The family will receive friends at the Williams Funeral Home on Tuesday, December 8, 2020 from 5:00pm until 7:00pm. A native of Bronx, New York, Pat was born on May 29, 1935 to the late Richard Ward and the late Margaret Fisher Ward. In addition to her parents, she was also preceded in death by a sister, Peggy Ward Whelan. Pat moved from New York to Milledgeville in 1975, and was a member of the Sacred Heart Catholic Church. In 1999, Pat moved to Florida, and became a member of St. Timothy Catholic Church. Pat is survived by her husband, Eugene Patrick Donovan; her sons, Gene Donovan, Jr. (& Jan); Joseph Donovan; and Patrick Donovan (& Pam); her sister, Phyllis McAward; her grandchildren, Chris, Michael, Skylar, and Rachel; and her great-grandchildren, Kimberly, Thomas, and Reed Donovan. In lieu of flowers, the family has requested that Memorial Contributions be made to Sacred Heart Catholic Church, 110 North Jefferson Street, Milledgeville, GA 31061. Condolences may be expressed online at: www.williamsfuneral.net Williams Funeral Home and Crematory of Milledgeville is in charge of arrangements.

The family of Patricia Elizabeth Ward Donovan created this Life Tributes page to make it easy to share your memories.