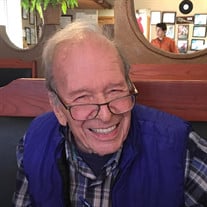 Philip Fullam Mellor, Sr., affectionately known as Pop, of Milledgeville, GA, passed away at home with his family and loved ones on March 29, 2022. He was born March 6th, 1934, in Silver City, New Mexico to Louise Fullam and Abe Barker Mellor. He was preceded in death by his wife, Jeanelle “Mimi” Mellor and his son, Derrick Mellor. Survivors include his son, Philip Mellor; daughter and son-in-law, Robin and Jimmy Heiden; son and daughter-in-law, Bucke and Gladys Watts, sister and brother-in-law, Tammy and Steve Frink; grandchildren, Rebekah Mellor Ketterman and Clay Ketterman, Jessica and Andrew Webster, Austin Hunter, Harry Watts and Ryan Montgomery, Christian Watts, Joseph and Alyssa Watts; great-niece, Allison Frink and her husband Jonathan and great-nephew Aaron Frink. Phil enjoyed work so much that he did not retire until his 80’s. He served in the Air Force, worked at NASA during the height of the space race, and then followed another career path of chamber of commerce and economic development work in several areas of Georgia and Alabama. Phil lived a very complete life, finding his fulfillment in later years working around the house and his immaculate yard and traveling with his wife, friends, and family. He loved Mimi, and they both were possibly the happiest when entertaining for birthdays and holiday get togethers. Pop loved his sweet dogs, Annie and Miss Priss. Phil was also a man of routine, especially his daily crispy bacon breakfasts with over easy eggs, toast and marmalade. He worked with the Sports Car Club of America for many years and relished “goosing” it in his Porsche. Anyone who knew him will recall the smell of his pipe and his twinkly-eyed grin whilst enjoying a smoke especially on his porch. He loved his family and was an encourager to everyone. He gave Parkinson’s disease a heck of a fight, always engineering ways to maintain his independence. He loved and was loved by many caregivers: Jamie, Melissa, Ray, Alayna, Sherry, Kaci, Lori, Barbara and Shelby. He also received wonderful care from Heartland Hospice staff, including some of the closest: Barbara Robertson, Charlotte Facciani, Ginger Collins, and Robby Kerr. In true Pop fashion, he enjoyed a ride on his boat 2 days before he passed away. His services will be a Visitation at Williams Funeral Home, 1670 N Jefferson Street NE, Milledgeville, GA on Friday, April 1, 2022 from 4:00-6:00 PM and a Memorial Service will also be held in the Chapel at Williams Funeral Home on Saturday, April 2, 2022 at 2:00 PM. For those who wish, memorial contributions may be made to the Parkinson’s Foundation or to All Angels Episcopal Church.

Philip Fullam Mellor, Sr., affectionately known as Pop, of Milledgeville, GA, passed away at home with his family and loved ones on March 29, 2022. He was born March 6th, 1934, in Silver City, New Mexico to Louise Fullam and Abe Barker Mellor.... View Obituary & Service Information

The family of Philip Fullam Mellor, Sr. created this Life Tributes page to make it easy to share your memories.