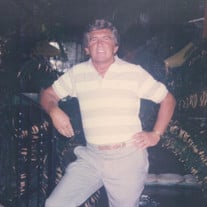 Mr. Ray Franklin Mobley, age 85, passed away on Sunday, March 14, 2021. A funeral service will be held on Thursday, March 18, 2021 at Williams Funeral Home in Milledgeville, GA, with visitation hours from 10-11 and service at 11:00 a.m. with Rev. Stan Berrong and Rev. Ralph Easterwood officiating. A committal service will be held on the same day at 3:00 p.m. at Floral Hills Memorial Gardens in Tucker, GA. In lieu of flowers, donations may be sent to the Alzheimer’s Association www.alz.org. Ray was born in Dekalb County on December 13, 1935 and was preceded in death by his parents, Anne Maude Mobley and James Frank Mobley; sister, Dorothy Cooper; and brothers, James H. Mobley and Billy H. Mobley. He is survived by his wife, Mrs. Michele Mobley; daughters, Mrs. Kim Smallwood (Mike) and Mrs. Terri Griner (Kyle); son, Chris Mobley; three grandsons, Shane Smallwood, Andrew Griner, and Alex Griner; two great-grandchildren, Carson and Camden Smallwood; sisters, Mrs. Dean Cain, Mrs. Novene Frazier, and Mrs. Mary Nell Jackson; brother, Mr. Bobby Mobley; two stepchildren, and several nieces and nephews. Ray was raised in Decatur, GA and began working as a brick mason with his father in the family business. He had a sincere passion for building and constructed his first home in 1965. He continued building custom homes for 38 years in Dekalb, Fulton, and Gwinnett counties. He was a member of Glen Haven Baptist Church where he developed life-long friendships that still stand strong to this day. He loved spending time with friends and family and was known for hosting numerous socials and family gatherings. He had a vivacious personality and people naturally gravitated towards him. Laughter was always plentiful in his presence. One of Ray’s favorite places to be was the beach where he vacationed for years with friends and family. Another favorite was Lake Oconee where he retired to in 2003. He was a beloved husband and father, but of all his many accomplishments in life, his most treasured role was that of “Pop.” Pop was much more than his grandparent nickname; it became his legacy as a pillar of unconditional love and laughter for all who came in contact with him.

The family of Ray F. Mobley created this Life Tributes page to make it easy to share your memories.