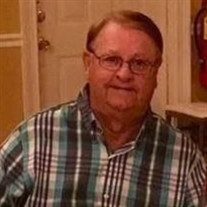 Statesboro, GA Mr. William Richard Dennard, age 76 passed away on Saturday January 2, 2021 at his residence under the care of Regency Southerncare Hospice after a long battle with Pulmonary fibrosis. A native of Gordon and Milledgeville, he had recently moved to Statesboro. Richard graduated from Georgia Southern University in 1966 with a BS in Marketing. He returned to Wilkinson County where he began a long career in the kaolin industry with Engelhard/BASF corporation. He became their Packaging and Transportation Manager. Because of his knowledge and customer service skills, he traveled extensively for Engelhard as their liaison, trouble shooter, and problem solver. He retired in 2009. He was preceded in death by his father W.C. Dennard, Jr. and mother Richie Stapleton Dennard Lavender and a brother Charles Dennard. Richard had a love for building projects and landscaping, so he was often the chairman of the church building and grounds committee at First Baptist Church, Milledgeville, GA. He is survived by his loving wife of 56 years, Cindy Collins Dennard, a son Chandler Dennard (Kem), a daughter Caryl Gearig; granddaughters Kaylee Dennard Collins (Hunter), Kalissa Gearig and fiancé Chaning Housley , Lauren Dennard Humprhies (Jarret) and Kendall Gearig and fiancé Dakota Lamb; a sister-in-law Doris Dennard; several nieces and nephews; also, special to him are Heath Wilson, Thomas and Drew Wilson and Troy and Mason Gearig. A celebration of life service will be held on Thursday January 7, 2021 at 2:00 p.m. in the Chapel of Joiner-Anderson Funeral Home. Visitation will be held following the service. Inurnment will be in Bulloch Memorial Gardens. For those desiring to view the services via livestream may do so by joining the group “Joiner-Anderson Live Stream” at: https://www.facebook.com/groups/jafhlive/. The family requests that memorial contributions be made to Mayo Clinic, Department of Development 200 First Street SW, Rochester, MN 55905 or to the Pulmonary Fibrosis Foundation, 230 East Ohio Street, Suite 500, Chicago, IL 60611. Friends may sign the online register book at www.joineranderson.com. Joiner-Anderson Funeral Home is in charge of the arrangements. Joiner-Anderson Funeral Home - Statesboro 502 Miller Street Ext. Statesboro, GA 30458

Statesboro, GA Mr. William Richard Dennard, age 76 passed away on Saturday January 2, 2021 at his residence under the care of Regency Southerncare Hospice after a long battle with Pulmonary fibrosis. A native of Gordon and Milledgeville, he... View Obituary & Service Information

The family of Richard Dennard created this Life Tributes page to make it easy to share your memories.