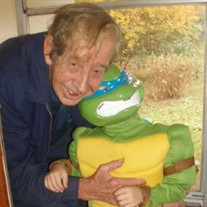 Robert Lee Avery, age 94, of Milledgeville, passed away Wednesday, July 1, 2020. Graveside Services for Robert Avery will be conducted Friday, July 3, 2020 at 2:00pm in the Bethel United Methodist Church Cemetery. A lifelong resident of Milledgeville, Robert was born on September 8, 1925 to the late Thomas Avery and to the late Lydia Brantley Avery. Along with his parents, he was also preceded in death by his wife, Alice Avery. Robert was a Farmer, and Owner of Avery’s Store. He was a Korean War Veteran, having served in the U.S. Army. Robert is survived by: 2 sons, Gary Avery (& Brenda) of Milledgeville and Bobby Avery (& Jennifer) of Milledgeville ; 3 Grandchildren, Travis Avery (& Taylor), Michael Avery (& Brittany), and Colby Avery ; and 3 great grandchildren, Dakota Wade, River Avery, and Finley Avery. In lieu of flowers, the family has asked that memorial contributions be made to the Bethel Methodist Cemetery Fund, 861 GA Hwy. 212, Milledgeville, GA 31061. Condolences may be expressed online at: www.williamsfuneral.net Williams Funeral Home and Crematory of Milledgeville is in charge of arrangements.

The family of Robert Lee Avery created this Life Tributes page to make it easy to share your memories.