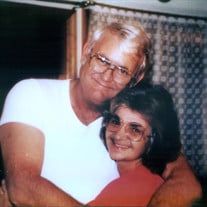 Rosemarie Garttner Griffin, age 80, of Milledgeville, passed away Wednesday, August 12, 2020. Celebration of Life services for Rosie Griffin will be held at a time to be determined later. A native of Weiler, Germany, Rosemarie was born on September 4, 1939 to the late Fritz Garttner and the late Barbara Luise Battenstein Garttner. In addition to her parents, she was also preceded in death by her husband, Jack W. Griffin, by a grandson, Chad Griffin, by a brother, Dieter Garttner, and by a son-in-law, Timothy R. Kruta. Rosie met Jack in Germany in the early 1960’s. They moved to Milledgeville in 1970 and began building their lives together. To all around them, it was obvious they were soul mates. After raising their children, Rosie and Jack moved to Lake Sinclair, where they enjoyed boating, fishing, gardening, and their friends. Sadly Jack passed in 1995, leaving a hole in Rosie’s heart. For the next 25 years, Rosie pushed on, pouring herself into her garden and her pets. She loved everyone and everything around her, and it was clear that she was a bright, magical light. Our hearts are broken that Rosie has left this earth, but we find solace in knowing that Rosie is finally back in Jack’s arms. Rosie is survived by: her children, Sabine G. Kruta of Sarasota, FL, and Jack W. Griffin, Jr. (& Terri) of Milledgeville ; her grandchildren, Barbara Kristine Kruta of Brooklyn, NY, and Crystal Purvis of Savannah ; her brother, Udo Saldeitis ; 8 great grandchildren ; and 2 great great grandchildren. In lieu of flowers, the family asks that Memorial Contributions be made to: The Animal Rescue Foundation of Milledgeville, 711 South Wilkinson Street, Milledgeville, GA 31061. https://www.petfinder.com/member/us/ga/milledgeville/animal-rescue-foundation-inc-ga59/ (478)454-1273

Rosemarie Garttner Griffin, age 80, of Milledgeville, passed away Wednesday, August 12, 2020. Celebration of Life services for Rosie Griffin will be held at a time to be determined later. A native of Weiler, Germany, Rosemarie was born on... View Obituary & Service Information

The family of Rosemarie Garttner Griffin created this Life Tributes page to make it easy to share your memories.