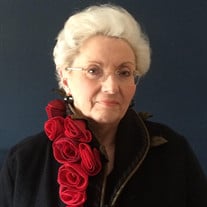 Rosemary DeBord Carter, age 76, of Sandersville, Georgia passed away Tuesday, March 12, 2019 after a courageous battle with cancer. She was born in Chillicothe, Ohio on September 3, 1942 to the late Melvin DeBord and the late Olive George DeBord. After graduating from Chillicothe High School, she went to work in the research department at Mead Paper. There she met the man who was to become her life partner, Charles Carter. They were married in 1961 and began their adventurous life together. They lived in many parts of the country and travelled the world making many dear friends along the way. Rosemary and Charlie lived in Georgia while serving in the US Army where their first daughter, Laura, was born. Following Army service, they returned to Ohio, then on to Wisconsin where their second daughter, Susan was born. Their journey through life also led them to have homes in St. Louis, Maine, New Jersey, and South Carolina, before settling in Sandersville in 1993. Rosemary was well known for her creativity, quick wit and laughter, natural beauty, compassion, and impishness (she loved a good prank). Rosemary became an integral part of her community wherever she lived through her participation and leadership in social groups and clubs. This included activities such as: exercise, theater, garden, card, dinner groups, and a variety of civic and church organizations. Rosemary’s priority in life was caring for her family. She was also passionate about merchandising, design, and production of women’s fashions. She was a very accomplished seamstress. Visitors to her home quickly recognized that she was a master interior decorator. She was also an excellent chef and entertainment hostess. She was preceded in death by her brother, Charles Jerry DeBord. Rosemary is survived by her husband, Charles Carter of Sandersville; daughters, Laura Carter of Ellsworth, Maine and Susan Davis of South Carolina; Two grandsons, John and Mark Davis; her sister, Jeannette Purdum of Lakeland, Florida; her brother, Michael DeBord and wife Sharon of Groveport, Ohio; many nieces and nephews; and one very dear cat, Max. The Celebration of the Life of Rosemary Debord Carter will be held at the Twin City Country Club in Tennille, Georgia on Saturday, May 11, 2019 at 5:00 pm. The family asks that donations be made to the American Cancer Society or the Multiple Myeloma Foundation.

Rosemary DeBord Carter, age 76, of Sandersville, Georgia passed away Tuesday, March 12, 2019 after a courageous battle with cancer. She was born in Chillicothe, Ohio on September 3, 1942 to the late Melvin DeBord and the late Olive George DeBord.... View Obituary & Service Information

The family of Rosemary Carter created this Life Tributes page to make it easy to share your memories.