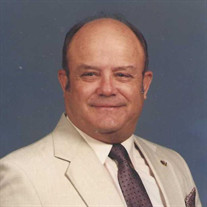 Roy Douglas Callaway, Jr., age 92, of Sparta, passed away on Tuesday, September 8, 2020. Funeral Services for Roy Callaway, Jr. will be Private, with burial in the Georgia Veterans Memorial Cemetery. A native of Hancock County, Mr. Callaway was born October 17, 1927 to the late Roy Douglas Callaway, Sr. and the late Annie Mae Fisher Callaway. In addition to his parents, he was also preceded in death by his wife, Grace Benton Callaway. He was a veteran, having served in the U.S. Navy, and then going on to retire from the U.S. Army National Guard, where he served as the Mess Seargent. Roy was a Mason, having been a Past Master of Sparta Lodge, and a current member of Benevolent Lodge #3 F&AM. He enjoyed traveling the southeastern United States and making new friends here locally while volunteering with Carpenters for Christ. Mr. Callaway was a member of Black Springs Baptist Church, where he had served as a Deacon. He is survived by: his daughter, Crystal Callaway Jackson (& George) of Sparta ; his son, Garry Douglas Callaway of Milledgeville ; his grandson, Andrew Ryan Jackson of Atlanta ; his brother, John William Callaway (& Bette) of Sparta ; a nephew, John Iverson Callaway (& Carol) of Sparta ; and a niece, Dianne Callaway Sheppard (& Cliff) of Sandersville. In lieu of flowers, the family has requested that Memorial Contributions be made to: The Georgia War Veterans Home, 2249 Vinson Hwy., Milledgeville, GA 31061, or to Black Springs Baptist Church, 673 Sparta Hwy., Milledgeville, GA 31061, or to PruittHealth Hospice, 6060 Lakeside Commons Drive, Macon, GA 31210. Condolences may be expressed online at: www.williamsfuneral.net Williams Funeral Home and Crematory of Milledgeville is in charge of arrangements.

The family of Roy Douglas Callaway, Jr. created this Life Tributes page to make it easy to share your memories.