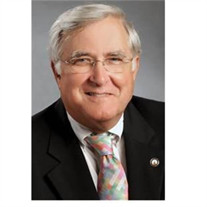 Edwards Culver “Rusty” Kidd III, Age 74, of Milledgeville, Georgia passed away peacefully on Tuesday June 2, 2020. Rusty was known for his exceptional athleticism, edgy sense of humor, and political savvy. However, his kindness and generosity, with a side of endearing sarcasm, overshadowed all of those commendable traits. One thing is for sure, if he teased you, he loved you, and he teased everyone. After surviving a traumatic motorcycle accident in 1999, Rusty became an advocate for people with disabilities, working extensively with Shepherd Center in Atlanta. His strength and resiliency following such a life altering event was unparalleled, and inspiring to everyone he encountered. Rusty had a long and successful career in business and politics. He excelled as a lobbyist, as Georgia’s only state representative elected as an independent, and as President of Middle Georgia Management, Inc. Today, Middle Georgia Management, Inc. employs over 60 families across the State. Despite his success, Rusty’s real Legacy lies in his passion for the people of Milledgeville and the prosperity of the city he loves. Although Rusty was prone to falls, burns, broken bones, infections, being stuck in the mud, and unavailable handicap parking spaces, his strength and positive attitude allowed him to persevere where few others could. He called it ‘Rollin’ with Rusty.’ He developed a knack for not sweating the small stuff. He often said “you can’t win if you don’t play,” and he loved to play. Rusty is preceded in death by his parents Culver Kidd II and Katherine Rogers Kidd, and sister Tillie Anne Fowler. He is survived by his daughter Katherine Kidd, his son Culver Kidd, IV, his grandson Culver Kidd V, and his sisters Kathy Kidd Marbut and Margaret ‘Candy’ Kidd. A small private graveside service for family will be held on June 4, 2020. In light of the current COVID-19 pandemic, the larger memorial service/party that Rusty requested will be held and announced at a later date. In lieu of flowers, donations can be made in his honor at www.shepherd.org/giving/charitable-giving or https://give.gmc.edu/ We were politely told that his casket would need to be “slightly larger than normal size.” Fitting, for a man whose personality was larger than life.

The family of Rusty Kidd created this Life Tributes page to make it easy to share your memories.