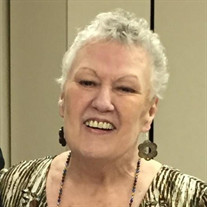 Sandra “Sandy” Carr Camilla, age 77, of Milledgeville, left her earthly home in the early hours of Sunday, January 24, 2021. Funeral services for Sandy Camilla will be conducted Friday, January 29, 2021 at 11:00am in the Chapel of Williams Funeral Home of Milledgeville. Interment will be privately held in the Georgia Veterans Memorial Cemetery. The family will receive friends at the Williams Funeral Home on Friday, January 29, 2021 from 10:00am until the service hour. Sandy was born on June 20, 1943 in College Park, GA to Robert and Ernestine (Franklin) Carr. She graduated from Campbell High School before moving to Milledgeville, GA in 1963. It was there that she met her best friend and the love of her life, John “Bo” Carmen Camilla. They eloped to South Carolina on November 27, 1964 with Sandy’s brother Bobby and his wife Judy present. On June 13, 1970 Sandy and Bo were blessed with the addition of their daughter, Amber Elizabeth. Sandy retired from Baldwin County Hospital in 1984 where she had worked as a Switchboard Operator, Insurance Clerk, and ended her tenure in Admissions for the hospital. There are few people on Earth like Sandy. A walking miracle, she made others feel like the most important person in the room. With a twinkle in her eye and a smile on her lips, she would craft jokes and banter with the best of them. Thoughtful of others, she was known to pen a letter or write a note to her loved ones. She loved “good ice” and could tell you the best places in town from which to purchase it. She was always adorned with fabulous earrings and a watch to complete her ensemble. She loved music, namely Elvis, Kenny Rogers, and Barry Manilow. You could find her humming a tune throughout the day and she was known to serenade you at a moments notice. She was a devoted wife, loving mother and the best big sister her siblings could have asked for. She is preceded in death by her father and mother, Robert and Ernestine Carr. She is survived by her husband, Bo; her daughter and son in law, Amber and Ryan McMillan; siblings, Bobby (Judy) Carr, Cheryl (John) Chapman, Brenda (Hugh) Hindman, Janice (Bud) Merritt, Tina (Owen) Pittman; her dear cousin, Madelyn; brother in law, Tony (Carla) Camilla; and a host of nieces and nephews. Condolences may be expressed online at: www.williamsfuneral.net Williams Funeral Home and Crematory of Milledgeville is in charge of arrangements.

The family of Sandy Carr Camilla created this Life Tributes page to make it easy to share your memories.