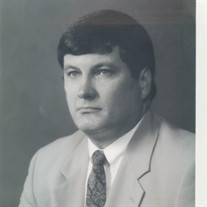 Hugh Alwyn “Skip” Becker, Jr., age 72, of Milledgeville, passed away Sunday, November 8, 2020. Funeral Services for Skip Becker will be conducted Thursday, November 12, 2020 at 11:00 am in the Milledgeville First United Methodist Church with Rev. Mac Enfinger and Rev. Stephanie Caldwell officiating. Interment will follow in Heritage Memorial Park. Pallbearers will be Jerry Cotney, Mike Hales, Cory Harris, Leonard Kaiser, David Olinski, Craig Pittman, Neal Reynolds, and Jimmy Webb. Skip was born to Hugh Alwyn Becker Sr and Jennilu Cook Becker on 8/29/48 in Birmingham Alabama. Shortly after he was born they moved to Baldwin County, Alabama. He grew up attending First Presbyterian Church in Foley, and graduated from Foley High School in 1966. He obtained his B.S. degree in Business from Auburn University in 1971, where he was a member of Theta Chi fraternity. He received his Masters in Business Administration at University of West Florida in Pensacola, and joined Atlantic Bank (later First Union) where he was Vice President / commercial lender. The family lived in Jacksonville 15 years, raising their son through high school. They attended Riverside Presbyterian Church, where he was ordained and served as Elder, and Treasurer. Skip was involved in community activities including Chamber of Commerce and The Bolles School parents fundraising and football boosters. In addition to his parents, he was preceded in death by his Step-father, Jay Weller Rice. In 2004 Skip joined Whitney Bank in Mobile and spent the last five years of his career before retiring from Wells Fargo Bank. The years in Mobile were among his happiest. He loved his neighborhood, Oakleigh Garden District, his church, Government Street Presbyterian Church where he served as Deacon, and everything Mardi Gras. He was involved in the community with various fundraising activities, and was a member of The Athelstan Club. In 2019 Skip and Deb moved part-time to Milledgeville Georgia to be near their son, daughter-in-law and grandsons, and made the move permanent in August 2020. They attend the First United Methodist Church in Milledgeville. Skip is survived by: his wife, Deb Burdeshaw Becker of Milledgeville ; his son, H.A. “Tripp” Becker, III (Robin) of Milledgeville ; his grandsons, Hugh Becker, IV, Clayton Becker, and McNair "Mac" Becker ; his nieces, Nicole Becker Bogran, Kathrine Burdeshaw White, Jessica Becker, and Debra Burdeshaw ; his brother, Richard Becker of Mobile, AL ; and a brother-in-law, Clay Burdeshaw (Sharon) of Birmingham, AL. In lieu of flowers, memorial gifts may be made to the Georgia Military College Foundation, 410 S. Jefferson St.; Milledgeville, GA 31061 View Funeral Service Livestream here: https://www.youtube.com/watch?v=MECLCOc6u64

The family of Skip Becker created this Life Tributes page to make it easy to share your memories.