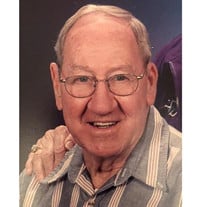 Thomas Lavender, Sr., age 92, of Milledgeville, passed away Saturday, June 13, 2020. Funeral Services for Thomas Lavender, Sr. will be conducted Wednesday, June 17, 2020, recognizing Covid regulations and social distancing, at 2:00pm in the Chapel of Williams Funeral Home with Rev. Randall Thomas officiating. Interment will be privately held in the Georgia Veterans Memorial Cemetery. Mr. Lavender was born in Toomsboro on November 2, 1927 to the late William Henry Lavender and the late Orion Walters Lavender. Along with his parents, he was also preceded in death by his wife, Freddie Ann Shiflet Lavender. Mr. Lavender lived in Milledgeville most of his adult life. Mr. Lavender served in the U.S. Army Air Corps, where he was a corporal in Guam during WWII. He served as an MP following the war. Upon returning from service, Thomas went to work at the Milledgeville State Hospital as a medical attendant, later becoming an LPN. He also joined the National Guard, becoming a Master Sergeant and a Sharpshooter. He left MSH to run the old Sinclair Auto Service Station on South Wayne Street, where he worked as a certified auto mechanic. After selling the station, he went to work for Orkin Pest Control in 1964. He moved with Orkin to Clairmore, Oklahoma, and later to Ozark, Alabama in 1965, where he bought another auto service station. It was here that he bought a 1957 Chevrolet, and raced it on the local dirt track race courses. He later sold the service station in Ozark, and he, along with his family, moved with Orkin to Pine Bluff, Arkansas for 1 year before returning to Milledgeville. Upon his return, he went back to MSH, where he worked as an admissions officer. Thomas later took a position at the Youth Development Center in Milledgeville as a Lieutenant, later becoming the Director of Security. He was instrumental in getting the lieutenants and director POST certified, as well as implementing uniforms for security staff, proper CB radios for the security cars, proper security cages in the cars, and the control fence around the campus. He also served as the YDC Fire Marshal. He retired from YDC and the Sate of Georgia in 1981, but remained a member of the Georgia Peace Officers Association for the rest of his life, and a Deputy Sheriff for several years into his retirement. Mr. Lavender is survived by his son, Thomas Lavender, Jr. (& Janet) of Milledgeville ; his grandchild, Karla Lavender Milikin (& Monty) ; and his great grandchildren, Presley Windham Milikin and Avery Leigh Milikin. Condolences may be expressed online at: www.williamsfuneral.net In lieu of flowers, Memorial Contributions may be made to Hospice Care Options, 163 Roberson Mill Road, Milledgeville, GA 31061.

The family of Thomas Lavender, Sr. created this Life Tributes page to make it easy to share your memories.