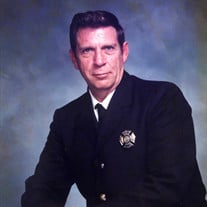 Thomas D. Sanford, 83 of Milledgeville GA, formerly of Freeville NY, passed away on Wednesday March 31, 2021 in Milledgeville. Tom was born in 1938 at home on Asbury Rd. in Lansing to the late Benjamin E. Sanford, Jr. and Esther C. (Bishop) Sanford. Tom was the youngest son and the ninth of ten children. The family moved to different homes in and around Ithaca before settling 509 W. Clinton St. Tom was a 1956 graduate of Ithaca High School and joined the US Navy afterwards. He was Honorably Discharged from active service in 1960. After returning home, he met and married the love of his life, Mary Howser in 1963. He joined the Ithaca Fire Department in 1966, retiring in 1987. When he was between shifts at the Fire Department, Tom drove delivery for Webster’s Laundry and Angelo’s Dry Cleaners. After his retirement from the city, Tom drove bus for the Dryden School District and then for Cornell Transit/TCAT, retiring after 10 years. In 2019 Tom and Mary made his dream of moving to the warmer south a reality, relocating to Milledgeville Georgia near their two daughters. Tom enjoyed bowling with Mary at the Cortland, Dryden and Ithaca area lanes and on travel leagues, as well as competing in the NY State Senior Olympics. He also pitched horseshoes in local leagues and just for fun. Tom and Mary could also be found at their grandchildren’s school plays, cheerleading, and sports. He was also an avid reader who passed the love of books on to his children. He enjoyed watching westerns, comedies, and James Bond movies. Tom was well liked and could often be found having coffee, playing cards, or sharing a meal with family and friends. Tom never met a stranger, and he treated everyone equally. He had a good sense of humor and many have said that seeing Tom was bright spot in their day. In addition to his parents, Tom was predeceased by his brothers Benjamin (Eleanor) Sanford III, David Sanford, and Richard Sanford; sisters Esther Stark, Ginny (Ken) Murphy, Jean (Lloyd) Layaw, Jane (Albert) Williams, and Lana Boyer; mother and father-in-law Mary and Frank Howser; brother-in law Franklin “Bud” Howser, Jr.; sisters-in-law Gail Blaker, and Linda Zimmer; and an infant son Joseph Paul Sanford in 1970. Tom is survived by Mary, his wife of 57 years, and daughter Deborah Sanford of Milledgeville GA; son Thomas (Christina) Sanford, Jr. of Groton NY; daughter Laurie (William) Statham of Eatonton GA; grandchildren Jessica (Kerry) Clausen of Lock Haven PA, Benjamin (Kimberly Campo) Sanford of Groton NY, Timothy Sanford of Dryden NY, and Diana Kirkland of Eatonton GA; brother Gerald (Chrissy) Sanford of Wilmington NC; brothers-in-law Arthur Howser Sr. of Ithaca NY, Robert (Evelyn) Howser of West Point NE, and Glen (Lynda) Howser of Maryville TN; sister-in-law Donna Piotti of Troy NY; four step-grandchildren, and many, many beloved nieces, nephews, and cousins. It was Tom’s request not to have a funeral service, so the family is planning a future get together where everyone can gather around, have some coffee and food, and reminisce about their fondest and funniest memories of Tom – just the way he would have liked. In lieu of flowers, the family has requested that Memorial Contributions be made to The American Heart Association, or the charity of their choice Condolences may be expressed online at: www.williamsfuneral.net Williams Funeral Home and Crematory of Milledgeville, GA is in charge of arrangements.

Thomas D. Sanford, 83 of Milledgeville GA, formerly of Freeville NY, passed away on Wednesday March 31, 2021 in Milledgeville. Tom was born in 1938 at home on Asbury Rd. in Lansing to the late Benjamin E. Sanford, Jr. and Esther C. (Bishop)... View Obituary & Service Information

The family of Thomas Dwight Sanford created this Life Tributes page to make it easy to share your memories.