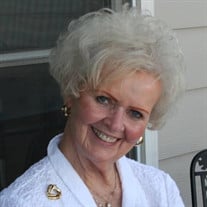 Virginia Anne Falvey Frankenberger, age 86, of Milledgeville, passed away Thursday, November 12, 2020. Funeral services for Virginia Frankenberger will be conducted Wednesday, November 18, 2020 at 2:00pm in Honey Creek Woodlands in Conyers with Father Young officiating. A native of Dayton, Ohio, Virginia was born on June 17, 1934 to the late Michael Falvey and the late Katherine Sifferman Falvey. In addition to her parents, she was also preceded in death by a son, Joseph Frankenberger, and by 6 of her siblings. Virginia enjoyed a long career as an Educator for 60 years. Her career began where she attended High School and College, at the Sisters of the Precious Blood Convent in Cincinnati, Ohio, where she also became a Teacher and Nun. Among her stations, she lovingly served in the Parrish School of Christ the King in Springfield, IL. With a true servant’s heart, she volunteered for 10 years at Missionaries of Charity Gift of Grace House in Atlanta. Virginia also authored the book “Gift of Grace House”. Mrs. Frankenberger finished out the last 25 years of her career with the Baldwin County School System. She was a member of Sacred Heart Catholic Church in Milledgeville, where she was heavily involved in the CCD religious program. Virginia is survived by her husband, John Joseph Frankenberger of Milledgeville ; her daughter, Anne Dixon (& George) of Lincolnton, NC ; her son, Paul Frankenberger (& Alyssa) of Atlanta ; her grandchildren, Madelyn Dixon, Gabriel Dixon, Jack O’Donnell, Mary Rita Frankenberger, and Michael Frankenberger ; and her sisters, Maureen Schutte and Delores Speevack. In lieu of flowers, the family has requested that Memorial Contributions be made to the: Missionaries of Charity Gift of Grace House, 995 St. Charles Avenue, Atlanta, GA 30306. Condolences may be expressed online at: www.williamsfuneral.net Williams Funeral Home and Crematory of Milledgeville is in charge of arrangements.

The family of Virginia Anne Frankenberger created this Life Tributes page to make it easy to share your memories.