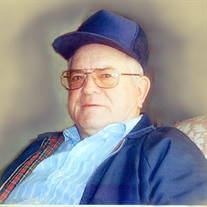 Wavlyn “Dock” Garrett, age 89, of Milledgeville passed away Friday, May 3, 2019. A native of Davisboro, GA, Dock was born on January 11, 1930 to the late Harper Garrett and the late Annie Mae Roberson Garrett. Along with his parents, he was also preceded in death by a Grandson, Ashley Garrett Peeler, and by his Siblings, James Garrett, Raleigh Garrett, Gladys Tanner, Jake Harrell, Ray Garrett, Bill Garrett, and Douglas Garrett. Dock lived in Milledgeville for the past 47 years. He worked as an Accountant with J.P. Stevens before retiring as an Accountant with American Industrial Clay, and owned Garrett Cleaning Service. Dock was a Veteran, having served in the U. S. Navy. He was a member of Northside Baptist Church. Dock is survived by: His Wife, Doretha Garrett of Milledgeville ; 2 Daughters, Doriann G. Peeler McEver (& Joe) of Milledgeville, and Dena Brett (& Mike) of Sandersville ; 4 Grandchildren, Garrett Brett (& Suzanne) of Milledgeville, Toni Sanders (& Clayton) of Sandersville, Jeremy Brett (& Rose), of Sandersville and Anthony McEver (& Ashley) of Milledgeville ; & 7 Great Grandchildren, Mia Sanders, Greyson Sanders, Cameron Brett, Clay Brett, Justin Brett, and Sutton McEver. Funeral Services for Wavlyn “Dock” Garrett will be conducted from the Graveside on Sunday, May 5, 2019 at 3:00 PM in Baldwin Memorial Gardens with Rev. Larry Glover officiating. The family will receive friends at the Williams Funeral Home on Sunday, May 5, 2019 from 1:30 PM until 2:30 PM. In lieu of flowers, the family has asked that Memorial Contributions be made to the Beverly Knight Olson Children’s Hospital by Navicent Health, 888 Pine Street, Macon, GA 31201 (www.childrenshospitalnh.org) Condolences may be expressed online at: www.williamsfuneral.net Williams Funeral Home and Crematory of Milledgeville is in charge of arrangements.

The family of Wavlyn "Dock" Garrett created this Life Tributes page to make it easy to share your memories.